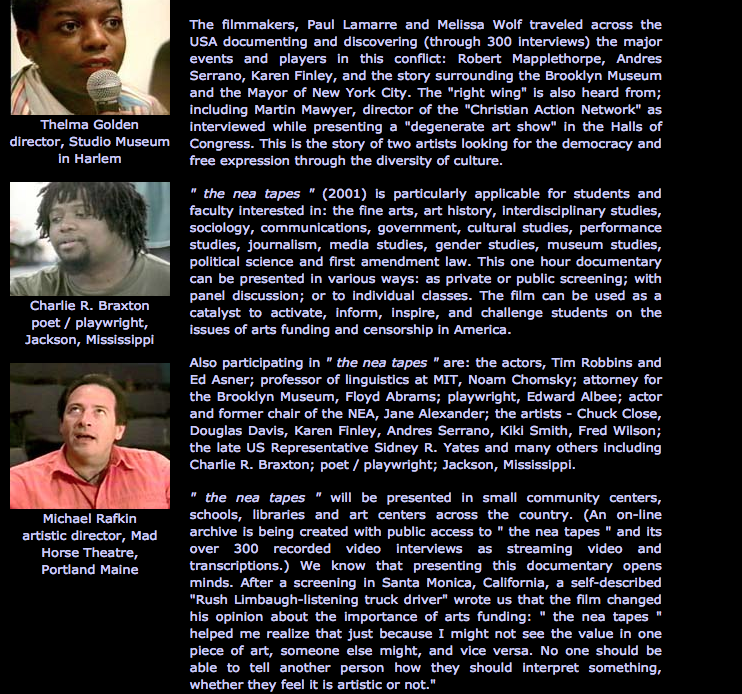 the nea tapes A Documentary Film

"This is a pretty good government that can fund its dissenters, that has the self-assurance to know that all voices can be heard in a democratic society."
Tim Robbins, actor / director, as quoted in “the nea tapes"
"It was frustrating.. I recognized pretty early on (that) it was a political game, maybe not in the first year but once I had gotten some response from some congressman on both sides of the aisle that said; Oh yes don't worry I am with you, but then they didn't vote with me. Then I realize there was something else going on."
Jane Alexander Chairperson of the NEA 1993 –1997,   as quoted in "the nea tapes "

Reactions to the film
"... It's just really incredible; and so important, and so necessary. Thank you for working so hard to liberate and save something that we all hold so dear."
Barbara Kopple, filmmaker (director/producer of  "Harlan County" winner Academy Award, 1976 for best documentary),
speaking about "the nea tapes"
"the nea tapes...wonderful...I think Paul and Melissa did a splendid job. I was quite amazed at how many different points of view were expressed."
Jane Alexander speaking about "the nea tapes"

The narrative
is an “oral history” of the 1990’s arts funding “culture wars"—increasingly worthy of preservation. There are 54 voices in the 60 minute film, edited from 300 interviews recorded across the US from 1995 to 2001. The film tells the story of diverse arts community support for America’s federally funded arts and humanities. It was the mandate of this film that this passionate oral and visual history be documented and retained. That said, this film provides an engaging platform for debate.
Increasingly we are told that the " the nea tapes " is being used by faculty and librarians from many differing disciplines for their own research on the culture wars, the history of funding for culture and censorship. Also, numerous faculty and librarians have informed us that since the film bridges many disciplines, colleges have been able to resource different departments for funds for a purchase or visiting artist presentation.
" the nea tapes," as a work in progress, has been screened in the Halls of the US Congress; at the College Art Association and broadcast on John Pierson's "Split Screen" show on Bravo and on the Independent Film Channel.
" the nea tapes " provides the back story from the formation of the National Endowment for the Arts in 1965, through the battles over suppressed speech in the 1990's, to why censorship is escalating. It is a story about the capacity of individuals to actuate change through dialogue. The plethora of opinions expressed in the 300 interviews present a multicultural, demographic overview of the subjects at hand. While framing the funding of ART within the context of free speech, the film documents how censorship effects not just the contemporary artist, but society at large. Lastly, " the nea tapes " makes this complicated subject understandable and assessable by using personal stories of individuals to delineate the diversity of culture by example.
The filmmakers, Paul Lamarre and Melissa Wolf traveled across the USA documenting and discovering (through 300 interviews) the major events and players in this conflict: Robert Mapplethorpe, Andres Serrano, Karen Finley, and the story surrounding the Brooklyn Museum and the Mayor of New York City. The "right wing" is also heard from; including Martin Mawyer, director of the "Christian Action Network" as interviewed while presenting a "degenerate art show" in the Halls of Congress. This is the story of two artists looking for the democracy and free expression through the diversity of culture.
" the nea tapes " (2001) is particularly applicable for students and faculty interested in: the fine arts, art history, interdisciplinary studies, sociology, communications, government, cultural studies, performance studies, journalism, media studies, gender studies, museum studies, political science and first amendment law. This one hour documentary can be presented in various ways: as private or public screening; with panel discussion; or to individual classes. The film can be used as a catalyst to activate, inform, inspire, and challenge students on the issues of arts funding and censorship in America.
Also participating in " the nea tapes " are: the actors, Tim Robbins and Ed Asner; professor of linguistics at MIT, Noam Chomsky; attorney for the Brooklyn Museum, Floyd Abrams; playwright, Edward Albee; actor and former chair of the NEA, Jane Alexander; the artists - Chuck Close, Douglas Davis, Karen Finley, Andres Serrano, Kiki Smith, Fred Wilson; the late US Representative Sidney R. Yates, and many others, including Charlie R. Braxton; poet / playwright; Jackson, Mississippi.