Paul Lamarre and Melissa Wolf are artists and filmmakers from New York City who work collaboratively under the name EIDIA (see Manifesto.) Together, they serve as co-directors of EIDIA House, a Brooklyn-based meeting place and forum for artists, scholars, poets, writers, architects and others interested in “idée force” the arts as an instrument for positive social change. EIDIA’s practice presents its form through multimedia installations, photography, sculpture, video, painting and aesthetic research. Their endeavors explore the dynamics of art politics, social spaces and the environment. EIDIA works are in numerous private collections, museums, art institutions and in over 200 prominent universities and colleges internationally.
INSTAGRAM 1
INSTAGRAM 2 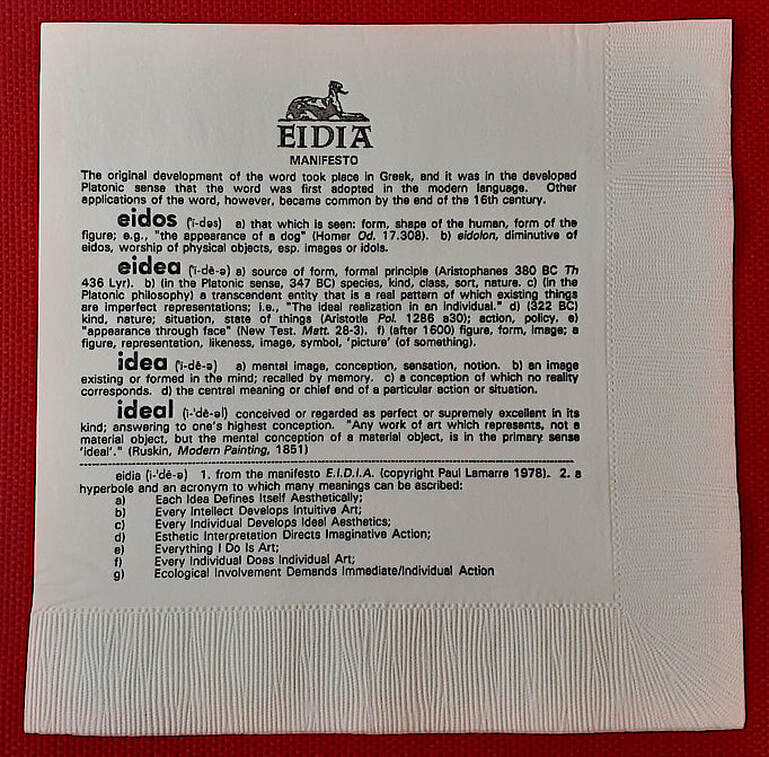 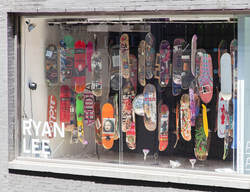 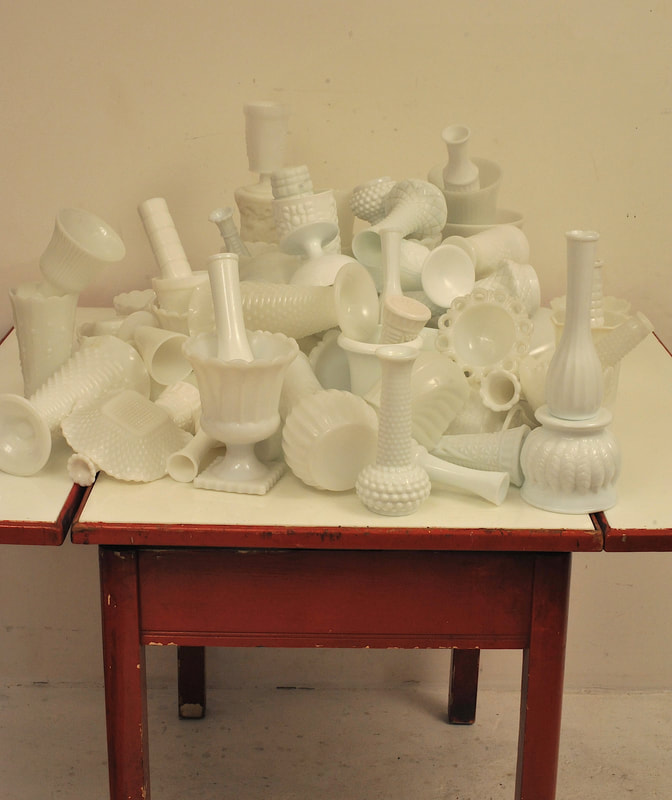 "The Milk Glass Table R4" with 100 assorted Milk Glass Vases, 2004-present, 44x40x31inches.
Reclaimed and repurposed vintage milk glass table and vases 1930's to 1950's by EIDIA.  Arrangement of vases is at the discretion of the curator, gallerist, or collector.
"This proto creation through new knowledge and value recontextualizes the existing object—thus transmogrifying it with new meaning…Milk Glass Table R4 seeks to represent a new form of aesthetic freedom – one not defined by the quantity produced and finance invested in the art practice but rather one predicated on collecting and editing preexistent things/objects. Consequently, items once produced as new designs and inventions, later discarded as trash, are then rescued and re-invigorated with value and pertinence of meaning."
http://www.projectanywhere.net/the-deconsumptionists-art-as-archive-eidia-melissa-p-wolf-and-paul-lamarre/

"While I can't say with confidence that I would have understood their mission without having spoken to the founders, Eidia House (pronounced idea house) is committed to the realization of ideas, utilizing an approach referred to as R-4: reduce, reuse, recycle, and renew. Paul and Melissa are proponents of deconsumption, and they want us to think about changing our approach to the exploitation of the objects that are already in the world. They are interested in regenerating universal ideas that occur in art and design, while exercising a little restraint with the amount of material production that takes place in pursuit of these ideas.."  By Blake Moore a former principal designer with Girth Design 2004.
http://www.core77.com/reactor/firstop/ 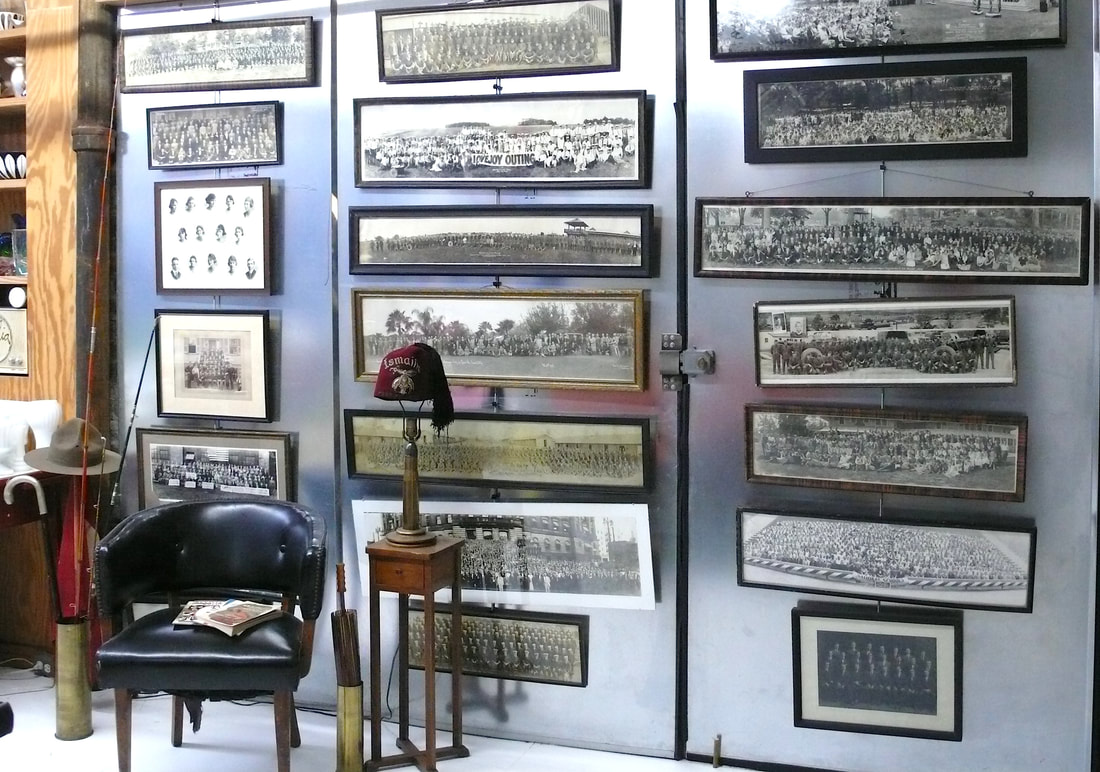 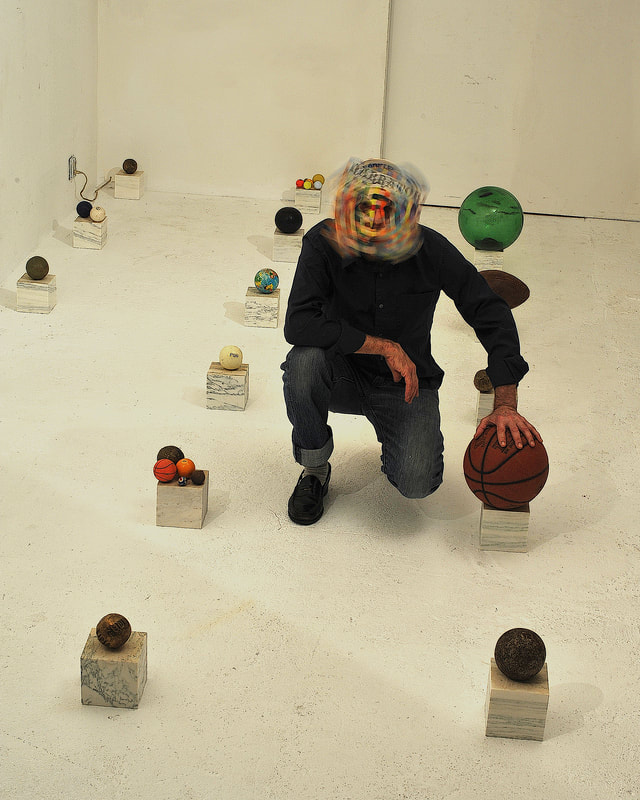 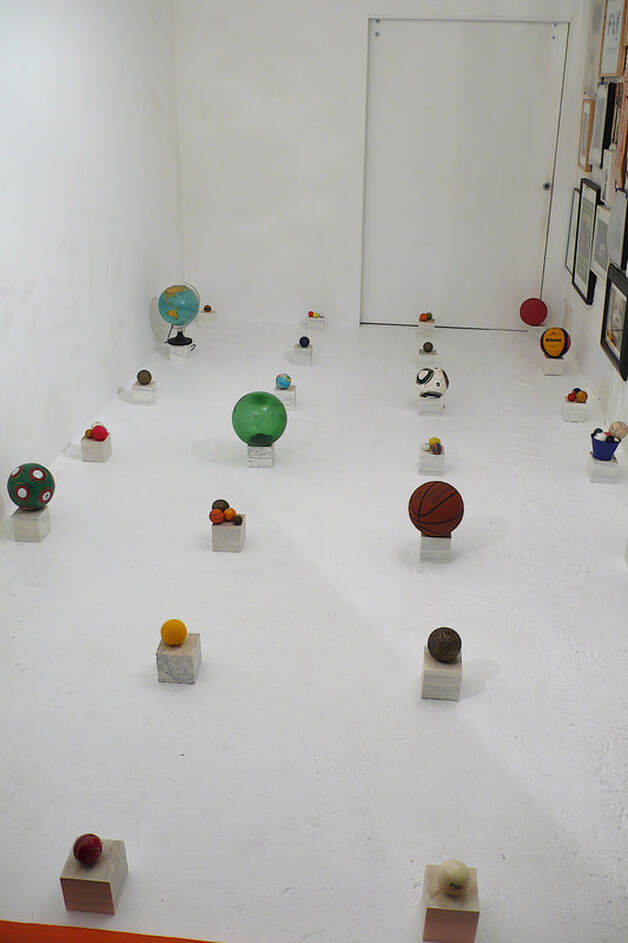 Like any ball game wherein the players passionately play to win as if they were "gods" seeking to control the universe—using any and all tactics of play—the EIDIA Ball Game is put forward as a symbol of the earth- you to decide how you choose to play it. What is the earth for you as you hold it in your hand? You can play the game in a stupid fashion, or you can choose to be responsibly intelligent, given the earth is a ‘ball’ on which you and future generations depend on to survive.  EIDIA’s “Ball Game" is an installation of balls of various histories, traditions, and compositions which are perched on fifty - 5x5x5 inch custom cut honed finish solid white Carrara marble cubes which are spaced 3 to 10 feet apart on an exhibition floor so the viewer can walk between and perhaps grab a ball and join the game. Four balls are custom cast solid bronze, embossed with the EIDIA logo and with Greek God’s names such as Zeus and Hermes. Visitors to The Ball Game hold the bronze ball in their hand as they stroll between the varied balls on the marble cubes. As gods gaze down at their earth they contemplate what games they will play with their “blue planet.” From a cat's eye marble to a basketball or cricket or ping pong or golf ball, the game is on. It is your play. 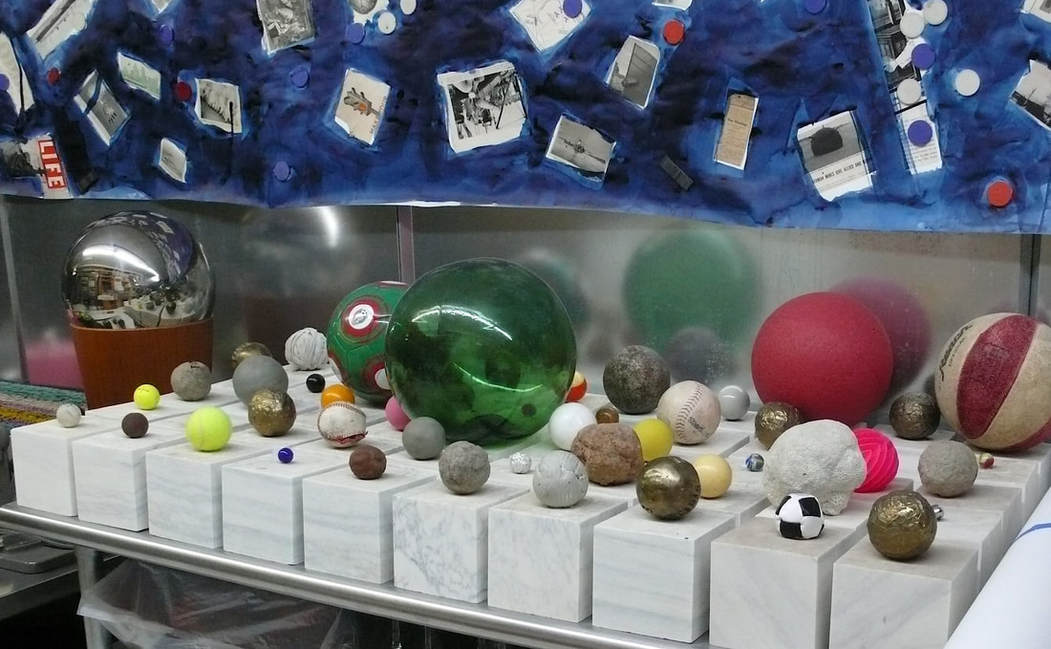 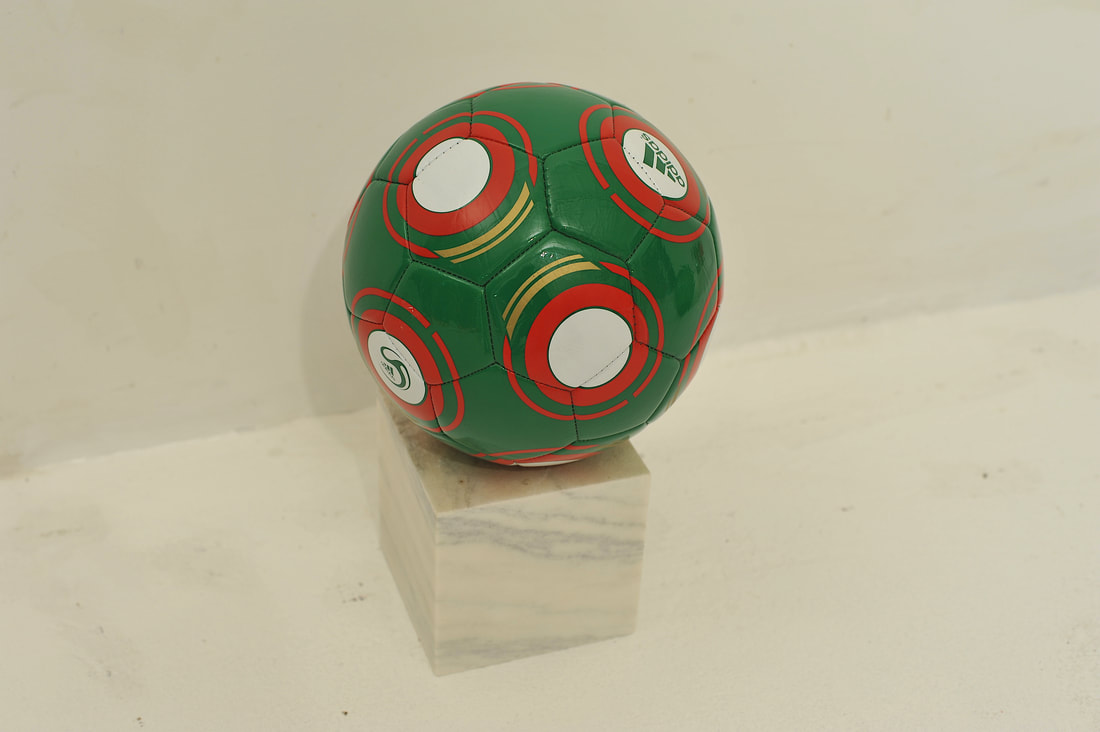 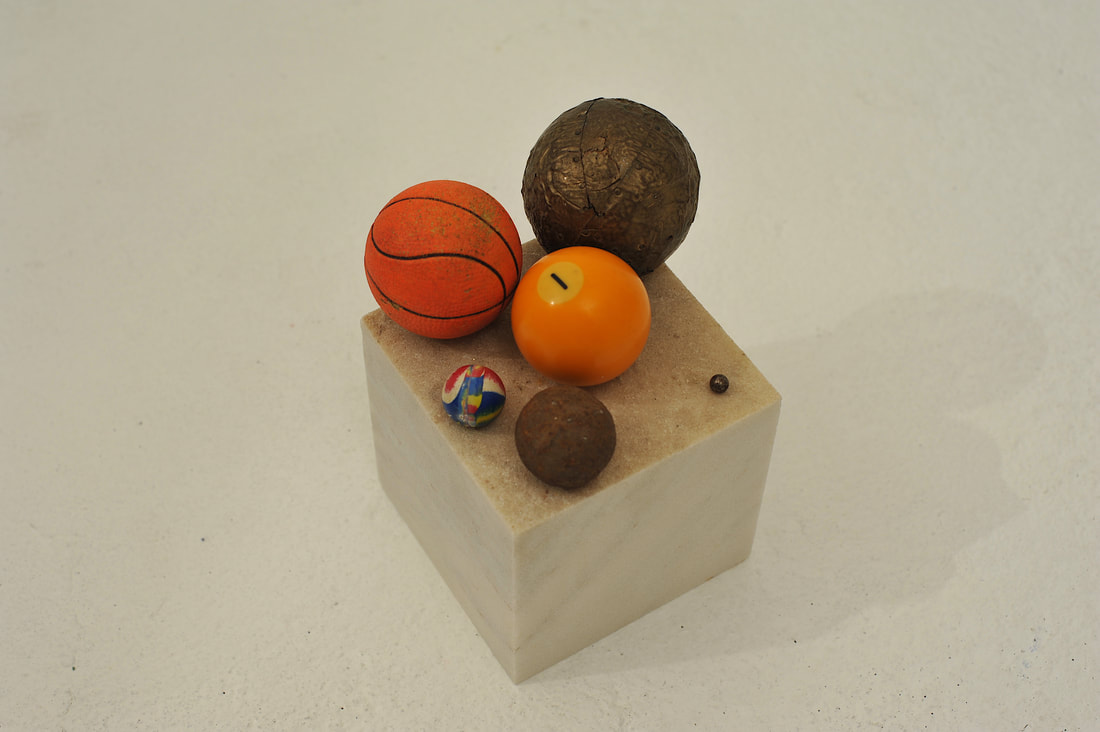 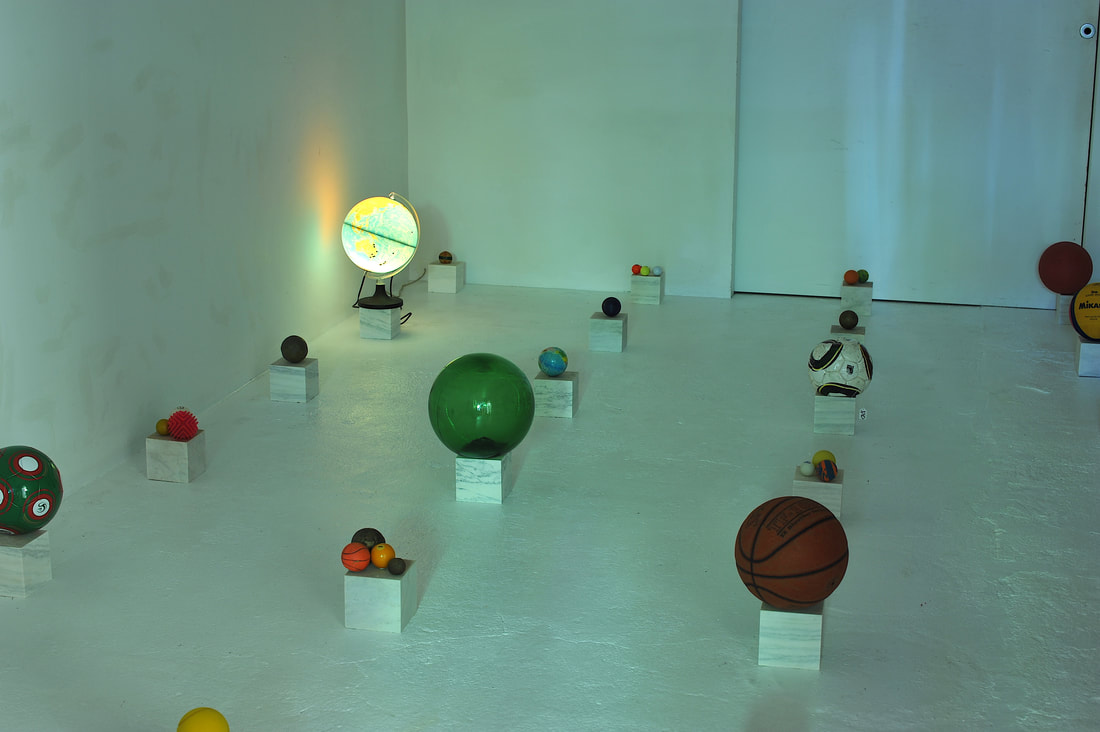 "Collages" 1990-present
EIDIA’s collage / ‘bricolages’  represent a key aspect of  EIDIA's 'aesthetic research' by transforming accumulations-of readymades,  if you will, into an aesthetic displacement. These assemblages are montaged images culled from the propaganda organs of the 1950’s -60’s -70’s that served to promote the consumerist ethos as the raison d'être of American life. The collages plummet the depths of the ’collective memory’ contrasting images of revolution, violence, protest and war with the ‘objects of desire’ sex, cars, fashion, fast food and beautiful homes. This work is also influenced by the "Cut-Ups" of William Burroughs and Brion Gysin, the "Combine" paintings of Robert Rauschenberg, the Shadow Boxes of Joseph Cornell and photomontages by Gilbert and George.
The Collage works are composed on most recently found materials such as Record Album Covers , Vinyls and skateboard Decks and archival rag ,1975 to the present in varying sizes from 4 x 9 feet to 4 x 5 inches. They are in numerous collections along with other EIDIA and EIDIA House works. 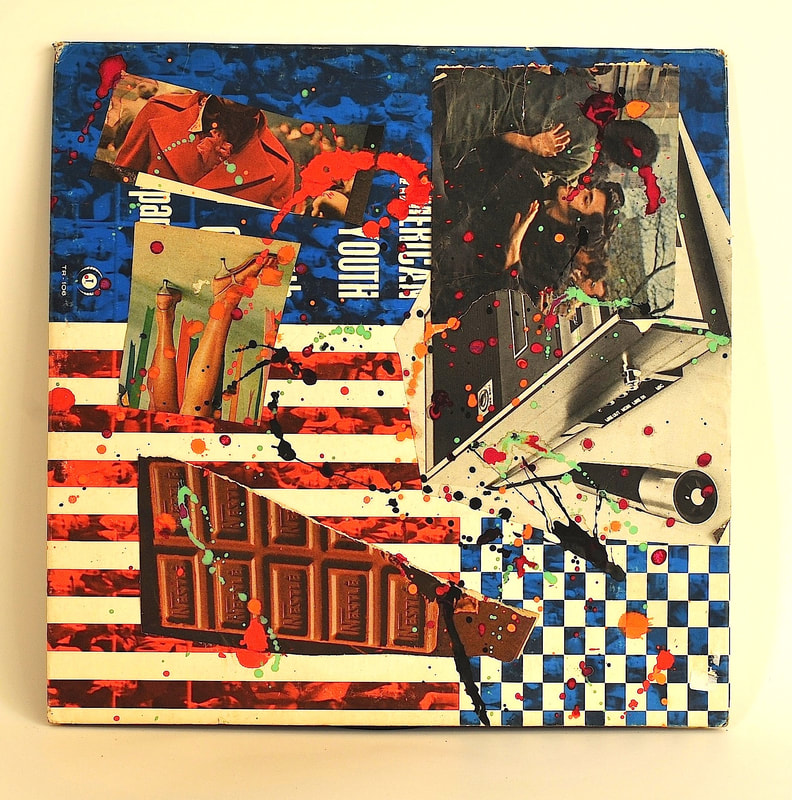 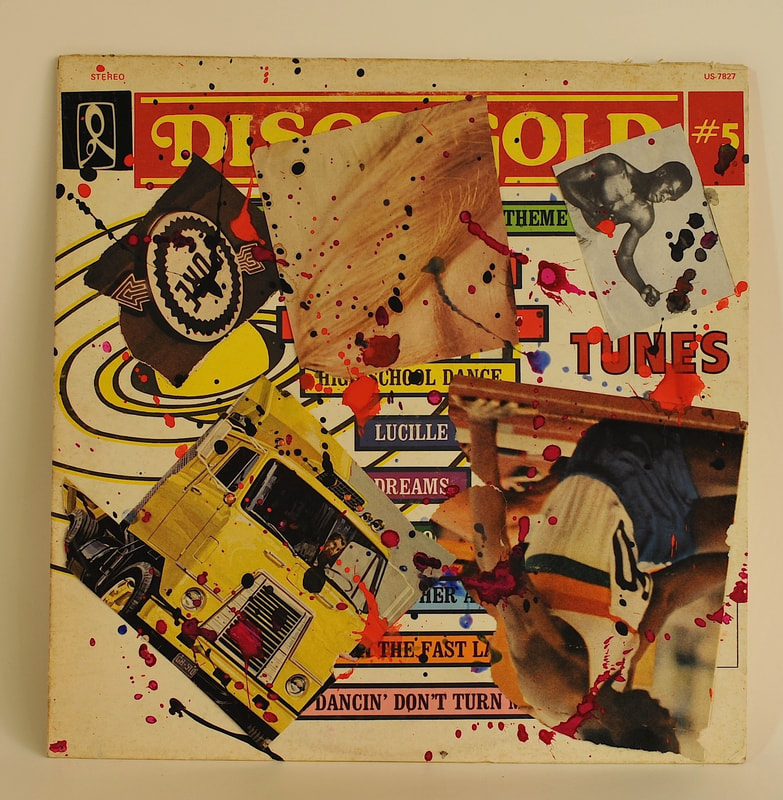 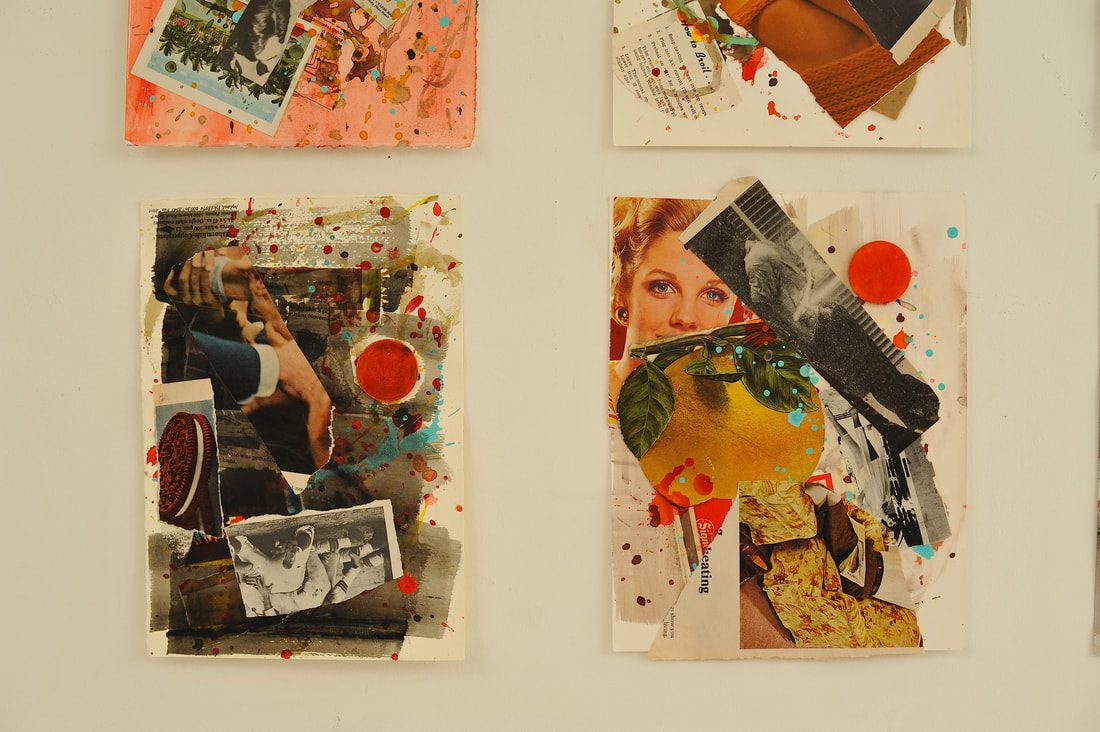 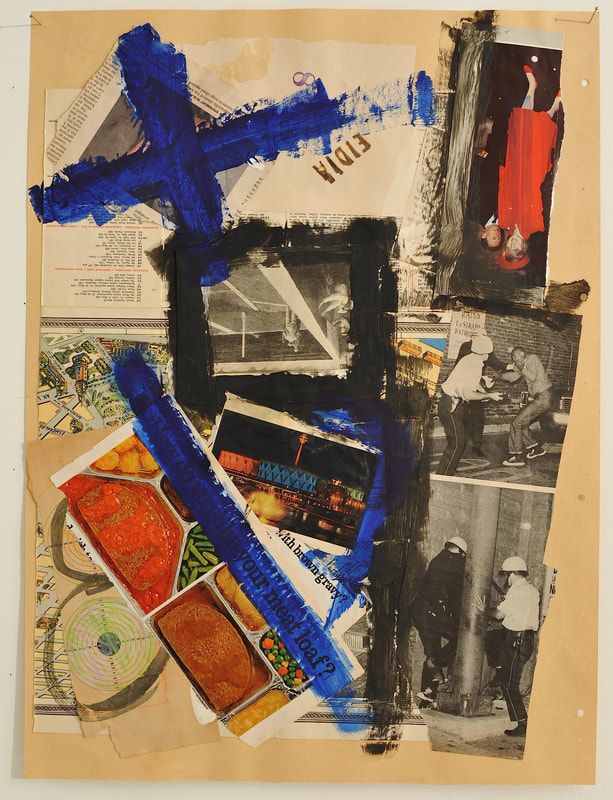 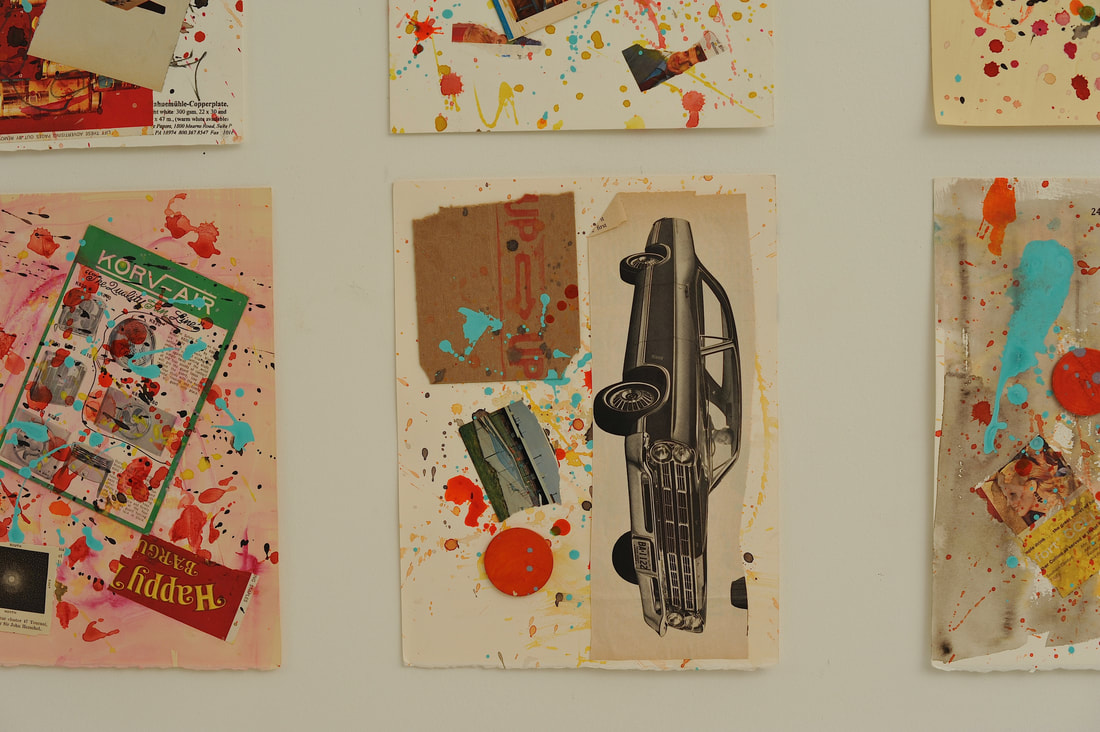 "ROY G BIV" impasto paintings 1985-1989
The ROY G BIV impasto paintings are a series of nearly 30 paintings and sculptures ranging in numerous sizes between, 9"x16" and 17" X 7 foot, on wood bases executed by EIDIA and an intern in a tiny art studio in the famous 611 "Cable Building" in SoHo. The pigment formula was invented and developed by Lamarre while being mentored by Jerome Kamrowski the noted New York Abstract Expressionists (and Surrealist) who headed the painting department at the University of Michigan. Kamrowski also had previously mentored the artist Mike Kelley.
The intended style of the work was EIDIA's response to the burgeoning trend  in artist run galleries like International with Monument, and Nature Morte know as “Neo-Geo.” This was during the period of the Post-Modernistim in the East Village art scene with artists like, Jeff Koon, Meyer Vasiman, Peter Halley and Mark Dagley. When these artists started to show in commercial galleries the passion and innovation of the movement pretty much petered out. With these works EIDIA mocked the idea of the commodified art trends and comments on how irksome the frivolous the art world is.
© 2021 EIDIA 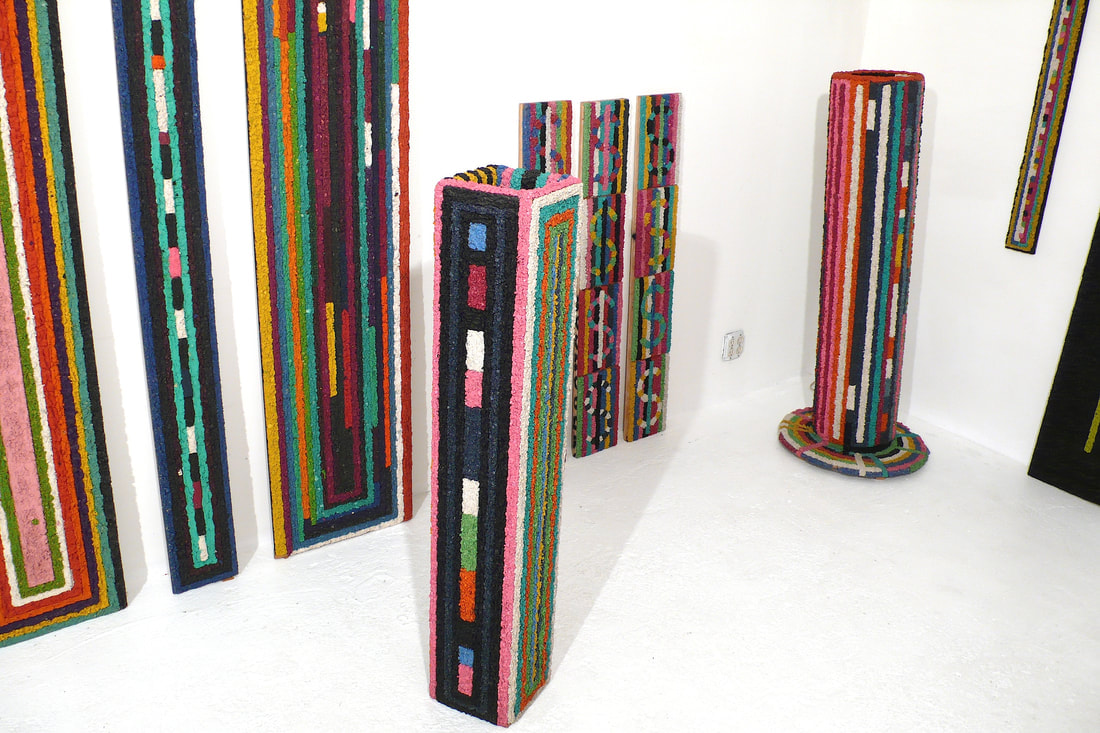 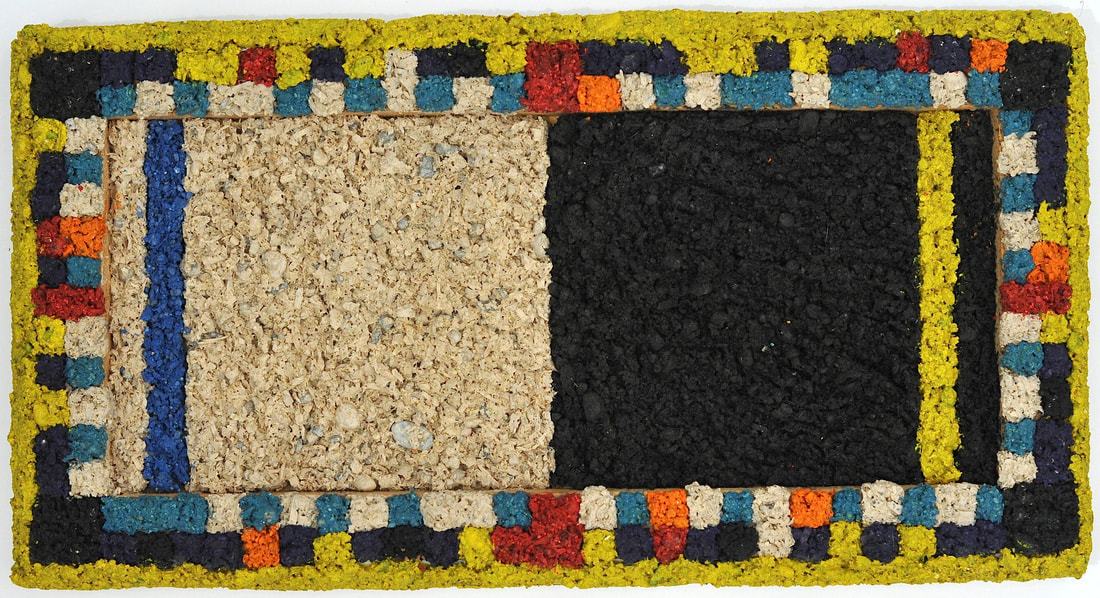 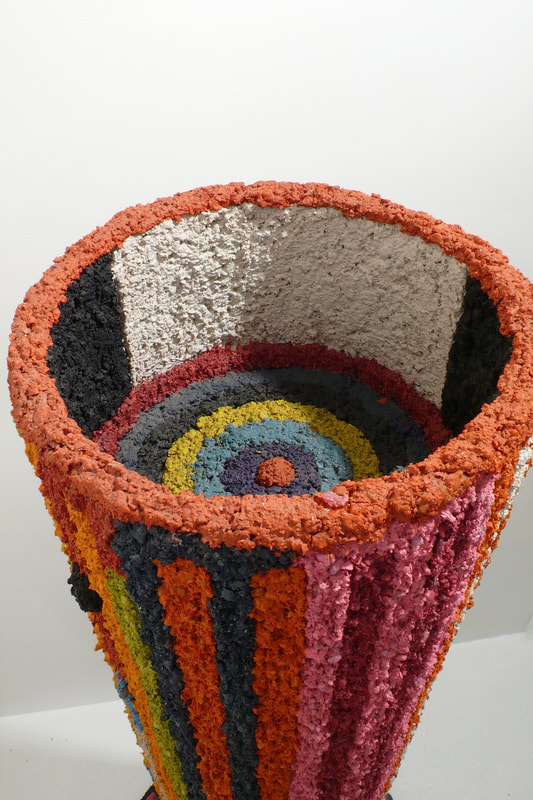 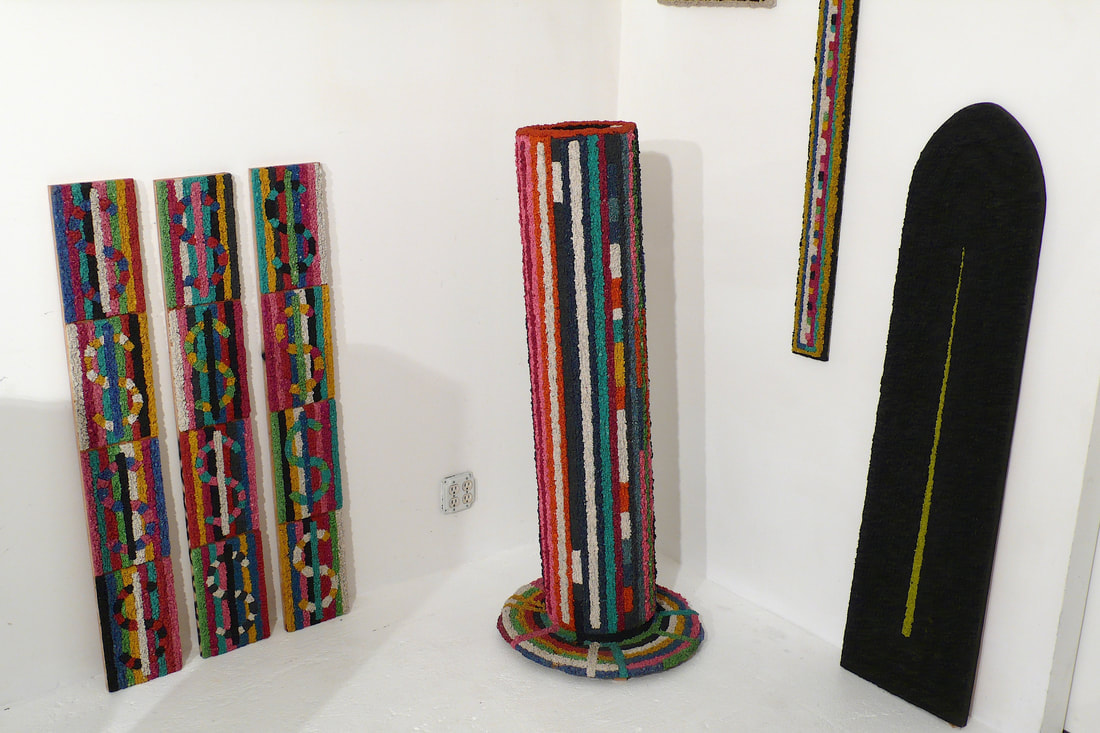 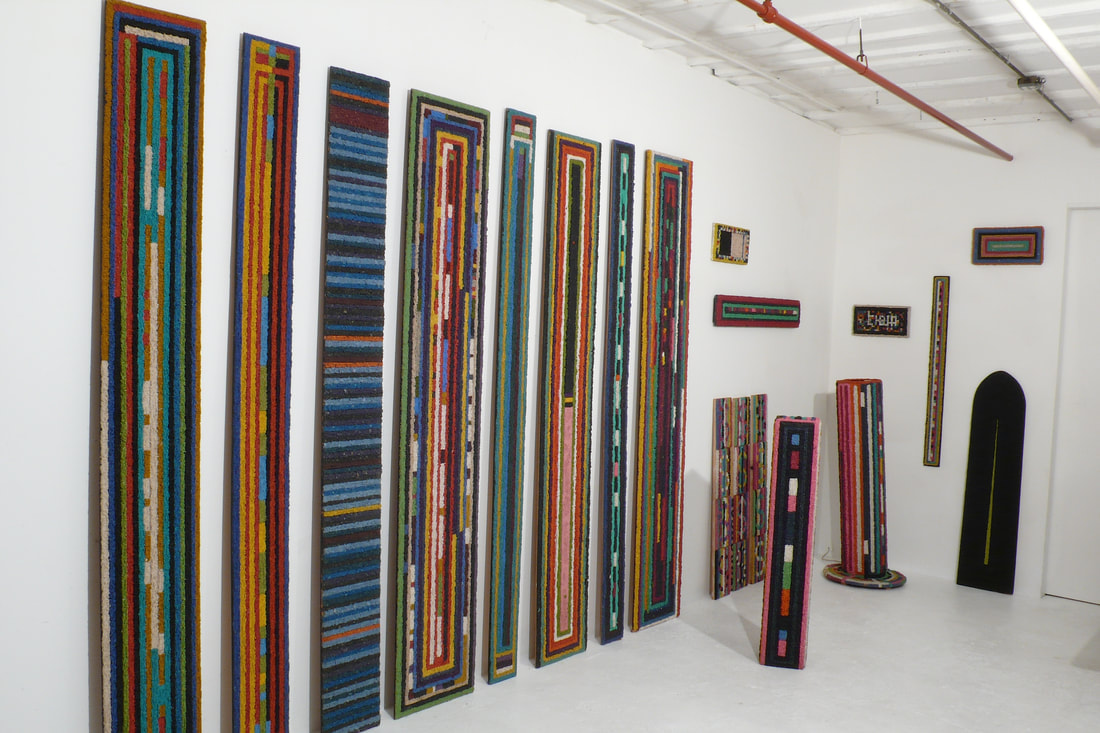